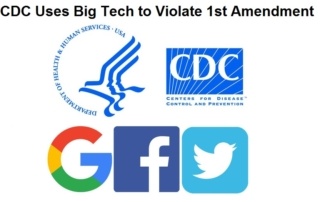 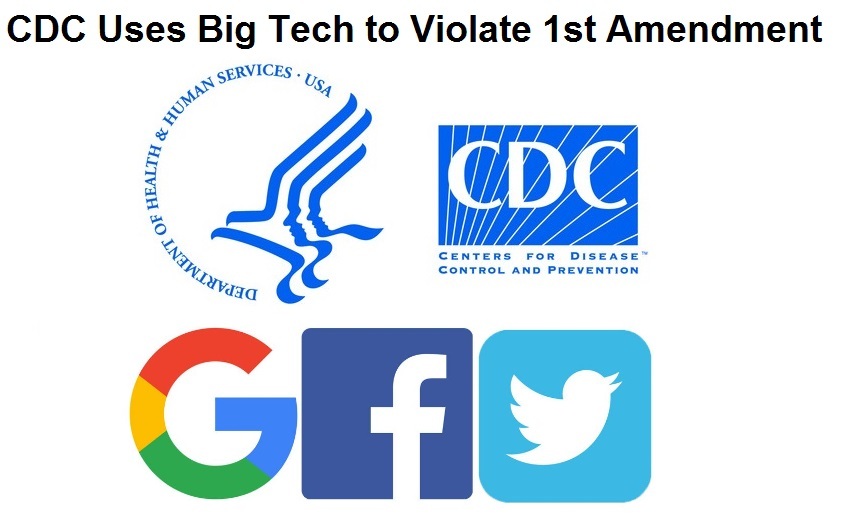 The right of every American to question and criticize their government is enshrined in the Bill of Rights in the First Amendment. Prohibiting dissenting views on any government institution or practice is strictly unconstitutional.

However, for the past few years many people have voiced concern about Big Tech platforms censoring dissenting views against the government, and the most common argument used by Big Tech is that they are simply a private platform that allows people to voice their views, and that the First Amendment does not apply to private corporations.

But now emails between the CDC and Google, Facebook, and Twitter have surfaced that suggest that the U.S. Government is, indeed, censoring dissenting views by influencing these Big Tech platforms, specifically in regards to the COVID-19 vaccines.

Given how deadly these experimental vaccines have been, this is a very serious matter, and I would expect more lawsuits filed in the weeks and months ahead for what appears to be a gross violation of the First Amendment and the right of American citizens to criticize and question their government, especially in regards to medical and health issues.

The US Centers for Disease Control and Prevention (CDC) gave censorship ‘suggestions’ to social media companies and Google in order to censor users who expressed skepticism or criticism of COVID-19 vaccines, according to the Washington Free Beacon, which obtained a trove of internal communications obtained by America First Legal.

The emails, between the CDC, Google, Twitter and Meta staffers – some of whom (as Just the News notes) were former Hill and White House aides – were obtained through a Freedom of Information Act lawsuit, and show extensive cooperation which included thinly veiled threats for failing to more aggressively remove content.

Over the course of at least six months, starting in December 2020, CDC officials regularly communicated with personnel at Twitter, Facebook, and Google over “vaccine misinformation.” At various times, CDC officials would flag specific posts by users on social media platforms such as Twitter as “example posts.”

In one email to a CDC staffer, a Twitter employee said he is “looking forward to setting up regular chats” with the agency. Other emails show the scheduling of meetings with the CDC over how to best police alleged misinformation about COVID-19 vaccines. -Free Beacon

In one April 2021 email between a CDC staffer and Facebook, concern was raised after “algorithms that Facebook and other social media networks are apparently using to screen out posting by sources of vaccine misinformation are also apparently screening out valid public health messaging, including [Wyoming] Health communications.”

Another email from March 2021 from a senior CDC staffer states: “we are working on [sic] project with Census to leverage their infrastructure to identify and monitor social media for vaccine misinformation.”

What’s more, one email chain reveals that a CDC official showed up at Google’s 2020 “Trusted Media Summit” conference, which was held for “journalists, fact-checkers, educators, researchers and others who work in the area of fact-checking, verification, media literacy, and otherwise fighting misinformation.”

When asked by an organizer if the senior CDC official would allow her remarks on YouTube, she declined, saying she was not authorized to speak publicly.

In the same email chain with a senior CDC official, a Google staffer offers to promote an initiative from the World Health Organization about “addressing the COVID-19 infodemic and strengthen community resilience against misinformation.” That same Google staffer offers to introduce the CDC official to a Google colleague who is “working on programs to counter immunization misinfo.” -Free Beacon

Meanwhile, Facebook gave the CDC $15 million in ad credits to use on the company’s platforms in April, 2021.

“This gift will be used by CDC’s COVID-19 response to support the agency’s messages on Facebook, and extend the reach of COVID-19-related Facebook content, including messages on vaccines, social distancing, travel, and other priority communication messages,” reads an internal memo.

As the Beacon notes, the level of coordination between government and big tech raises questions over what extent other private companies are working with the federal government in order to censor the public – including payment processors, Uber and other platforms which have banned the unwashed for wrongthink.

The revelations have also caused the New Civil Liberties Alliance to file a Thursday court document seeking to revive their lawsuit against the government on behalf of deplatformed users.

New Civil Liberties Alliance attorney Jenin Younes told Just the News it incorporated “the revelations about the CDC emails” into a filing Thursday seeking to reopen its case against the feds on behalf of deplatformed users.

A federal court dismissed that litigation a month before a whistleblower leaked documents suggesting the Department of Homeland Security’s since-scrapped Disinformation Governance Board planned to “operationalize” its relationship with social media companies to remove content. NCLA cited those documents in its initial motion to reopen in June. -JTN

JTN further notes that the document dump is also likely to come into play in a lawsuit by Missouri and Louisiana AGs against the government for alleged collusion with Big Tech to censor content on the origins of COVID-19, as well as Hunter Biden’s laptop and vote-by-mail election integrity.

The feds filed a motion to dismiss two weeks ago for lack of legal standing and failure to state a claim. The AGs’ responses aren’t due until next week.

AFL’s documents show the CDC shared specific tweets and Facebook and Instagram posts as examples of content to remove, including an interview with a former Pfizer vice president, Michael Yeadon, who advised against taking “top up” vaccines, meaning boosters.

The agency inserted its own COVID recommendations into Google’s code, received $15 million in Facebook ad credits to promote its messaging, and even notified Facebook that Wyoming’s public health messages were getting throttled as misinformation. -JTN

Recall that just one day after top health officials had a conference call to discuss a Zero Hedge article which highlighted a now-withdrawn paper from researchers in India suggesting “HIV-like insertions” in COVID-19, Twitter banned our account for roughly two months – with the tech giant claiming we doxxed a Chinese scientist (with publicly available information) in another article.

Thanks to a recent Freedom of Information Act (FOIA) request for Fauci’s emails, we know that the National Institutes of Health was not only aware of the Indian report, but were actively discussing how to handle it.

“I was told by a contact you may be willing to give an opinion of this paper that has just gone live. It suggests the new Coronavirus has four inserts similar to HIV-1 and this is not a coincidence,” reads the email.

Graham immediately forwards the correspondence to the Office of Communications and Government Relations (OCGR), saying “This is one we don’t want to answer without high-level input, but wanted you to know about the rising controversy.”

Two days later, Jennifer Routh OCGR replies, telling Graham: “OCGR is going to send a note to the reporter to decline, noting that the paper is not peer-reviewed. Please let us know if you receive similar requests.”

That same Sunday morning, Fauci is looped in – with Sir Jeremy Farrar forwarding Zero Hedge‘s article after mentioning how World Health Organization Director Tedros Adhanom and the organization’s cabinet chief were in ‘conclave’ – ostensibly on how to manage the narrative – noting “If they do prevaricate [bullshit the public], I would appreciate a call with you later tonight or tomorrow to think how we might take forward.”

“Do you have a minute for a quick call?” Fauci replies, after having called the Indian paper “really outlandish.”

Of course, the Indian paper was quickly withdrawn by its authors, and the notion that COVID-19 could have been man-made was rendered radioactive – for a while.

Is it any question how our Twitter (and Google) deplatformings happened, before both companies chose to reverse their decisions?

Understand the Times We are Currently Living Through

Are You on the Right Path in Life? There May Not be Much Time Left to Decide

Loyalty to Christ Must Surpass Loyalty to Family: “I Did not Come to Bring Peace, but a Sword” – Jesus

What Happens When a Holy and Righteous God Gets Angry? Lessons from History and the Prophet Jeremiah

Identifying the Luciferian Globalists Implementing the New World Order – Who are the “Jews”?

Fact Check: “Christianity” and the Christian Religion is NOT Found in the Bible – The Person Jesus Christ Is

The Seal and Mark of God is Far More Important than the “Mark of the Beast” – Are You Prepared for What’s Coming?

The Satanic Roots to Modern Medicine – The Mark of the Beast?

Medicine: Idolatry in the Twenty First Century – 6-Year-Old Article More Relevant Today than the Day it was Written

Having problems receiving our newsletters? See:

How to Beat Internet Censorship and Create Your Own Newsfeed

We Are Now on Minds.com, MeWe, and Telegram. Video channels at Bitchute, and Odysee.

If our website is seized and shut down, find us on Minds.com, MeWe, and Telegram, as well as Bitchute and Odysee for further instructions about where to find us.

If you use the TOR Onion browser, here are the links and corresponding URLs to use in the TOR browser to find us on the Dark Web: Health Impact News, Vaccine Impact, Medical Kidnap, Created4Health, CoconutOil.com.