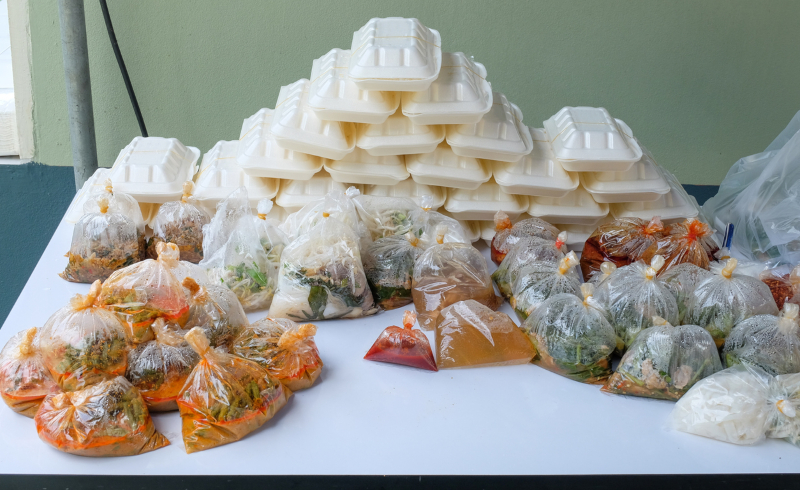 A community-initiated food bank, established to serve the hungry amid the pandemic and its economic fallout, has inspired various mutual aid efforts across the Philippines.

More popularly known locally as “community pantries”, these food banks are spaces on the sidewalks or in plazas where people contribute food and other necessities to be taken by anyone who needs them. The first community pantry was put up in Maginhawa Street, a middle class residential area in Quezon City, on April 14, 2021.

SPOTTED! | This Maginhawa Community Pantry should sprout like mushrooms all over the Metro, all over the country. Let this act of solidarity among us, the Filipino people, be one of the steps to replace this incompetent and tyrant Duterte Admin.#RESIST#SolidarityAmidCovidCrisis pic.twitter.com/MDKTUBVTTl

The tweet made a reference to ciriticism made against President Rodrigo Duterte for mishandling the pandemic crisis.

The cart came with a handwritten cardboard signage in Tagalog: “Magbigay ayon sa kakayahan, kumuha batay sa pangangailangan,” which means: “Give according to one’s ability, get according to one’s need”. This loose adaptation of the famous Marxist creed quickly turned viral as the idea of putting up community pantries gained ground a few days after the one in Maginhawa started.

By April 17, 2021, over 44 community pantries, sprouting as far as Davao and Iligan in the southern Philippine island of Mindanao and in Pangasinan far north of the national capital, were tallied in a study by a group of Filipino sociologists. Today, a crowdsourced digital map, that helps find the location of community pantries, counts the existence of over 800 sites nationwide with the overwhelming majority found in the national capital region.

Assisting these initiatives are activist groups, church organizations, and concerned citizens who have been helping communities organize pantries, pool resources, and solicit donations from across the class divide. The way the community pantry initiative has been embraced by wide sections of society is testament to the worsening situation for the poorest and most vulnerable amidst what is now the world’s longest lockdown as the Duterte government fails to contain the pandemic.

With the closing of economic activities, the restriction of movement, and confinement of people in their homes, millions of families have experienced the loss of jobs and sources of income while not getting enough aid and financial support from government to survive the crisis.

The situation became even more difficult when a surge in COVID-19 cases led the Duterte government to reinstate even stricter lockdowns towards the end of March this year. A P1,000 (US$20) financial aid which the government promised for some 22.9 million impoverished families, is enough for only three days of bare subsistence, according to the government’s own poverty threshold. And yet after a month’s time, officials admit that only 4.4 million families have received this aid.

Social media users have pointed out how the community pantry idea is rooted in a native communal tradition called “bayanihan” which involves ordinary people coming together as a community to achieve a common goal.

The “community pantry” has definitely exposed cracks in the government’s pandemic response but at the same time highlighted the Filipino value of bayanihan. https://t.co/bEaHwwEZYo

In truth, the concept behind the community pantry, bayanihan, brings joy – those who have nothing are the ones who are helping…

As grassroots mutual aid efforts are undertaken by the community themselves to momentarily fill-in gaps in government measures, many netizens agree that the Duterte government must be held accountable for its failure to curb the pandemic and give economic support to the people.

each new community pantry highlights the fact that regular civilians, even those with their own pandemic struggles, have more empathy and initiative to do what they can for fellow filipinos than the duterte administration #DuterteResign #PalpakResign

imagine if the resources hoarded by the state and their compradors were channeled towards a sustainable national food security system founded on similar principles to the community pantry. imagine if the state, from the very start, approached crisis with humanitarian compassion

Rather than alleviating people’s hardships, Duterte government’s knee-jerk reaction was to repress the growing community pantry initiatives by red-tagging its organizers, or accusing them of being communist rebels. Community pantries across the country have reported surveillance, profiling, and harassment by police forces.

The Maginhawa community pantry is pausing operations today for security reasons amid reports of red tagging.

In a Facebook post by its organizer Ana Patricia Non, she reveals that the police asked for her personal number and inquired about her affiliation https://t.co/7s9Rmr7gvv pic.twitter.com/4GGODQJJQi

Official Facebook pages of local police departments have also posted visuals accusing the community pantry of being “recruitment hubs” for communist rebels. A community pantry in Cagayan de Oro City in Mindanao Island had to close shop after its organizers, including a young physics professor at the University of the Philippines, were red-tagged by police as communist rebels.

LOOK: leaflets being spread near the Cagayan de Oro Kauswagan community pantry accusing its volunteers as members of the CCPNPA. This has to stop!!!!!!!! #CommunityPantryPH pic.twitter.com/uCrcULjk9x

Meanwhile, a leaked internal memorandum of a regional office of the Philippine National Police in Mindanao Island exposed an official plot for police units to hold donation drives imitating the community pantry. The memo, which claims to be following orders from “higher-ups”, also instructed police to “plant beneficiaries” who will then have photo shoots as a way to “gain ground in fight against insurgency.”

In fact, President Duterte himself in a late night public address criticized community pantry as “just for show” and its organizers as “mindless.” General Antonio Parlade, the spokesperson of the National Task Force to End the Local Communist Armed Conflict (NTF-ELCAC) compared the Maginhawa Community Pantry initiator Ana Patricia Non to Satan. It can be recalled that Duterte formed the NTF-ELCAC in 2018 to channel the efforts of all government agencies towards its “whole-of-nation approach” to its counterinsurgency war.

But Duterte’s clampdown on people’s mutual aid initiatives has generated a strong public backlash, that a gag order was placed on spokesmen of its anti-communism task force so not to comment on the pantries . The Duterte government’s attacks on the community pantries has only added fuel to public’s discontent with the government’s incompetent response to the pandemic, which is not abating.

This post was previously published on Global Voices and is republished here under a Creative Commons license.

The post Community Pantries Inspire Hope Amid Pandemic and Economic Crisis in the Philippines appeared first on The Good Men Project.