New England Lobster Trap Christmas Trees | Where to Find Them

Each year as the holidays roll around, New England unpacks some of its most ornamental images: wreath-bedecked lighthouses, candlelight strolls on cobblestone streets, horse-drawn sleighs that jingled their way right out of Currier & Ives. But when it comes to conveying the wonder of the season, nothing can compete with lobster trap Christmas trees, wherein our regions humble fishing gear is magically transformed into an ooh-and-aah-worthy spectacle. 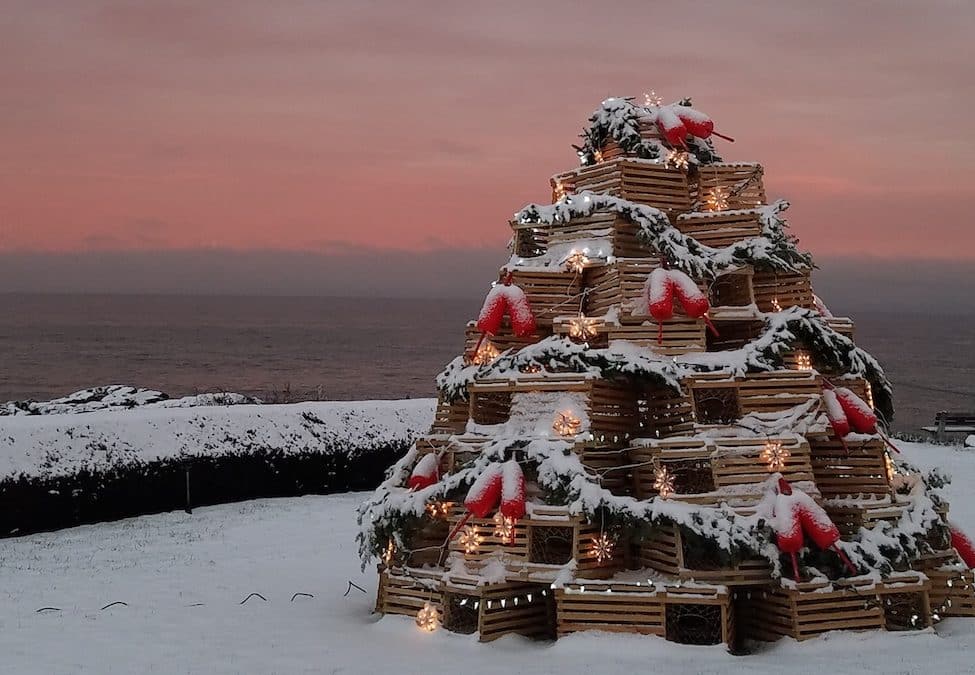 First, How Christmas Trees Got Started

Evergreen trees have long been somewhat elastic emblems. In ancient pagan celebrations of the winter solstice, their boughs were used to symbolize everlasting life; they were also thought to ward off evil spirits and misfortune. 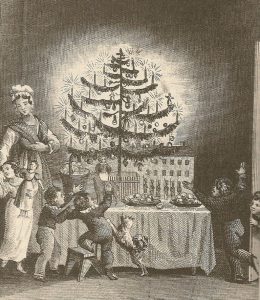 The first published image of a Christmas tree, from Hermann Bokums The Strangers Gift (1836).

By the 16th century, Christians in Europe had started decorating evergreen trees or even simple pyramids of wood as part of Christmas, reportedly to represent the Holy Trinity. Sometimes the trees were hung upside down, creating a shape that evoked Christ on the cross.

Thanks to Puritan distrust of its pagan origins, however, the Christmas tree didnt take root in this country until well after the War of Independence. But when it did, New England was a hot spot for the new custom: One of the earliest reports of a decorated tree comes from Lexington, Massachusetts, and it was a Harvard professors 1836 holiday book, The Strangers Gift, that contained the first Christmas tree image published in the U.S.

Next, How Christmas Trees Got Weird

This being America, one of the first trends with Christmas trees was super-sizing them. New Hampshires Franklin Pierce had a whopping 48-footer from Vermont brought in as the first Christmas tree at the White House, back in 1923. New Yorks Rockefeller Center tree launched at 20 feet tall in 1931 but clocked in at 50 feet by 1933; today it looms between 70 and 90-odd feet. Here in New England, Bostons holiday tree typically stands between 40 and 50 feet tall (and comes with an outsize origin story). 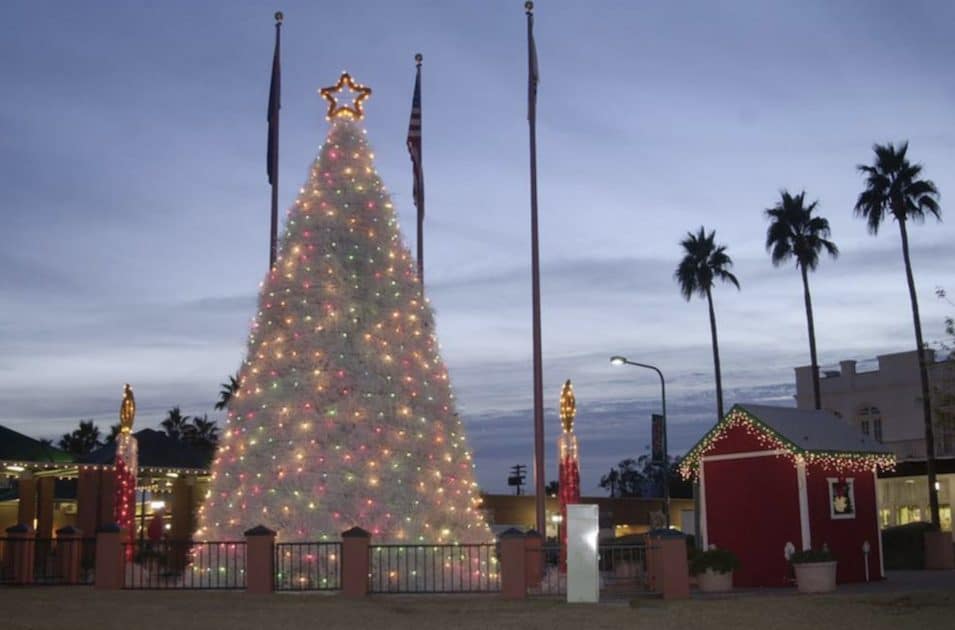 The town of Chandler, Arizona, says Merry Christmas with a 25-foot Christmas tree made of tumbleweeds spray-painted white and dusted with 65 pounds of glitter.

Throw in the crowd-pleasing spectacle of electric lights, and you can see how towns might seize on awe-inspiring Christmas trees a way to celebrate not just the holiday but also local pride. In Lynchburg, Tennessee, the home of Jack Daniels, that means building a tree out of 140 whiskey barrels. Since 1957, the town of Chandler, Arizona, has gathered annually around a Christmas tree made of more than 1,000 tumbleweeds. There are Christmas trees made of sand, shopping carts, and Porta-Potties, too.

Along the New England coast, small Christmas trees made of lobster traps have long been quirky front-yard decor. In 2001, though, the historic fishing port of Gloucester, Massachusetts, took things to the next level by building a lobster trap tree downtown, where everyone could enjoy it. 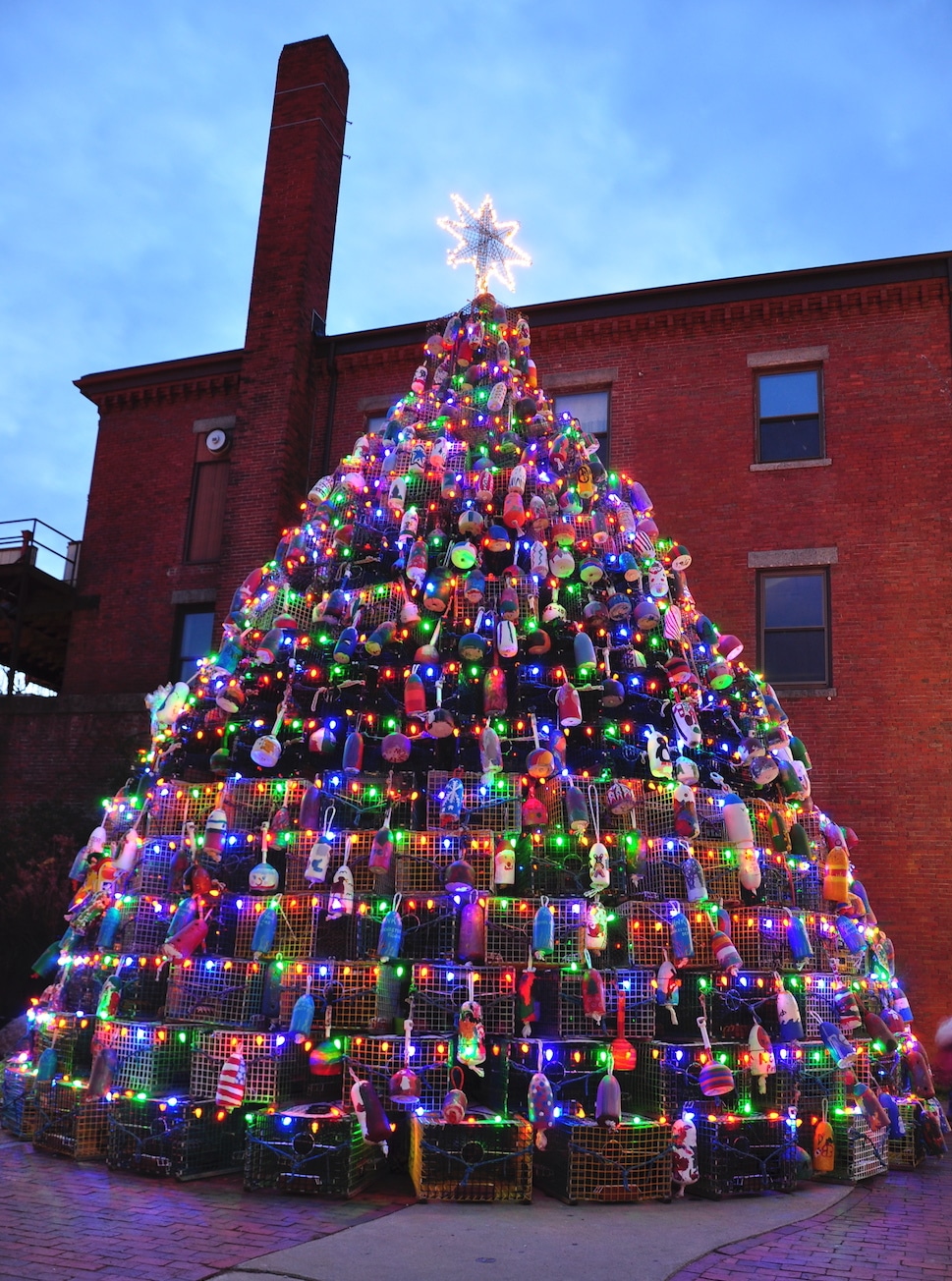 Gloucester, Massachusetts, is heralded as being the first New England city to build a lobster trap Christmas tree.

Nearly 20 years later, Gloucesters tradition is still going strong, with its seasonal Main Street attraction now topping 40 feet in height. It hardly stands alone, though, as lobster trap trees both massive and modest can be found in many places that have embraced this uniquely New England beacon of goodwill.

Heres where to bask in the glow of some of the best-known New England lobster trap trees, along with a few that we happened upon while researching this piece. (If you know of any terrific ones that we missed, be sure to tell us in the comments.)

Rockland:Reportedly the second New England town to launch its own lobster trap tree, just a few years after Gloucesters, Rockland uses more than 150 custom-built red and green traps for its version. Located near the harbor in Mildred Merrill Park, the finished 40-footer which is topped with an eight-foot fiberglass lobster is the centerpiece of Rocklands Festival of Lights celebration. 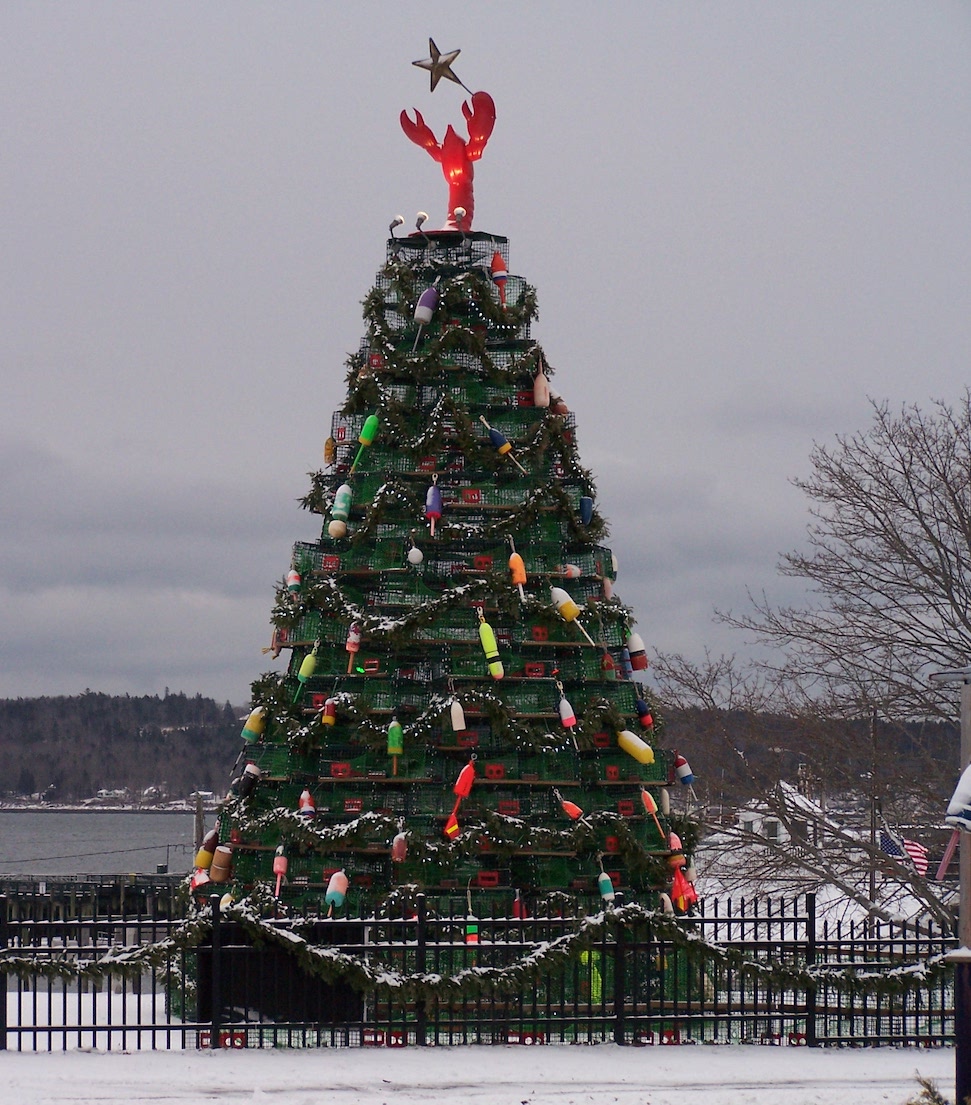 Kennebunkport:The Christmas Prelude, Kennebunkports famous monthlong series of holiday events, has not one but three tree lightings on its calendar. The one to look for is in Cape Porpoise, where classic wooden lobster pots are stacked into a tree about two stories tall.

Trenton:OK, they use lobster crates, not traps but when the telltale greenery-and-ribbon-covered pyramid rises alongside the Trenton Bridge Lobster Pound, next to the Mount Desert Island causeway, locals know its Christmastime.

York: Another seafood shack that likes to get into the spirit is Foxs Lobster House, whose roughly 15-foot trap tree vies with its legendary neighbor, Nubble Light, for holiday photo ops.

Portland: The heart of Maines biggest city glows with lobster trap love when the Portland Regency adds its special fund-raising version to the mix. 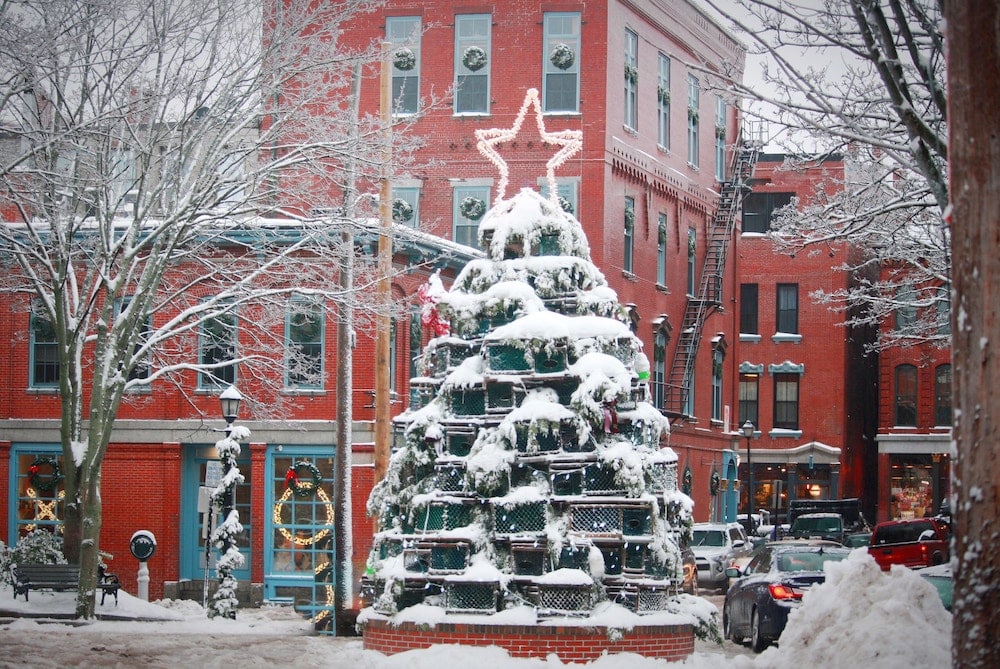 The Portland Regencys lobster trap tree makes for an urban postcard like no other.

Ogunquit: Offering possibly the most Instagram-ready background of them all, the Beachmere Inn puts up a tidy little lobster trap tree on a pristine stretch of lawn alongside the Marginal Way and beyond that, the crashing winter surf.

Gloucester: The city that started it all gathers in mid-December to light its lobster trap tree, whose hand-painted buoys are created by local residents young and old and later auctioned off to support the work of the trees organizer,Cape Ann Art Haven. (Note: In 2014, Gloucester also became the home of the worlds first lobster trap menorah.)

Provincetown: The late artist Julian Popko founded this tree tradition in 2014 as a way to honor local lobstermen. The two-story tree, whichsits in the heart of Lopes Square, is crowned witha twinkling cluster of buoys when itslighted at the end of November, and it keeps glowing strong until late January. 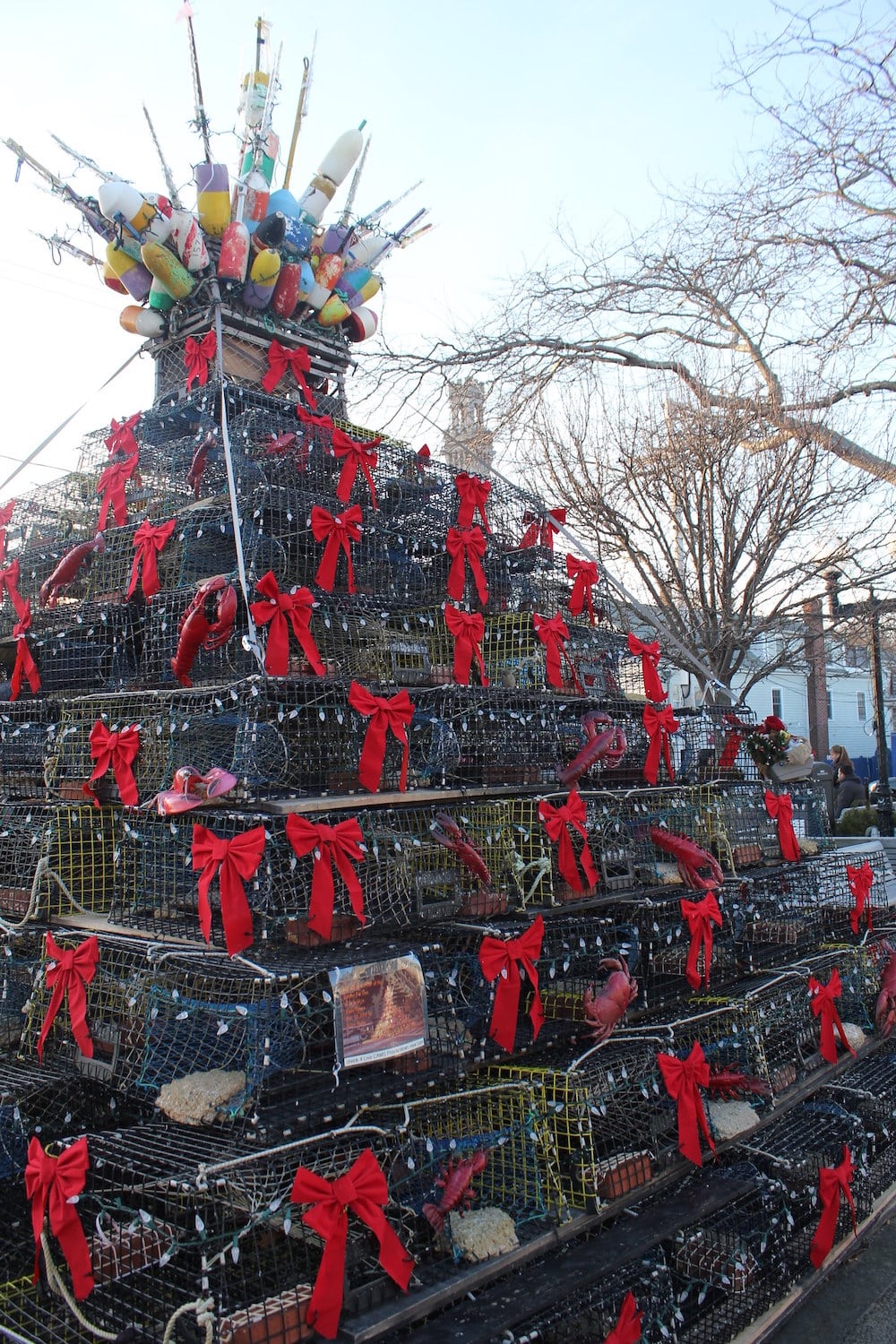 The top of the Pilgrim Monument can just be seen peeking over the shoulder of Provincetowns crustacean-filled tree.

Cohasset:Reportedly launched by a resident after hearing about a similar tree in nearby Hull, Cohassets lobster trap tree rises more than 30 feet from its base outside the restaurants Atlantica and the Olde Salt House. Residents can participate in a best buoy contest (the 2018 grand prize: a dozen live lobsters) as they create signature ornaments for the tree before thelighting ceremony in early December.

Plymouth: Local lobstermen launched their tree back in 2013 on the town wharf as a way to both celebrate the season and to remind visitors that theirs is a working waterfront. Its also become a focal point for holiday fund-raising.

Block Island: This glittering landmark that pops up in Estas Park in November began as a labor of love by resident Harold Hatfield, who has been building and decorating it since 2011 with the help of family and friends and the support of community. These days more than 200 traps go into making the tree, which is a must-visit during the islands annualHoliday Shopping Stroll Weekend. 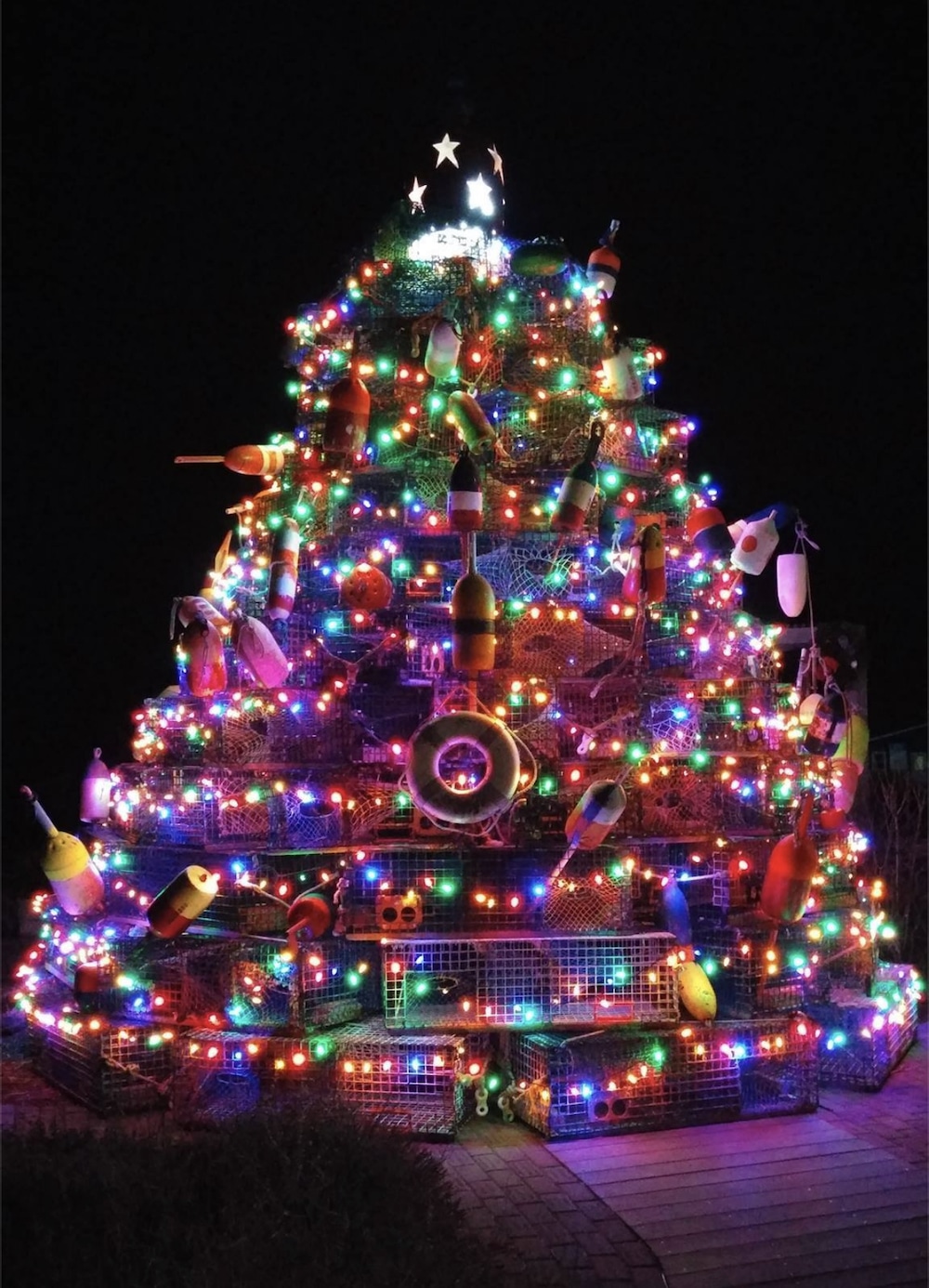 From Thanksgiving until January, this volunteer-built lobster trap tree shines forth on Block Island.