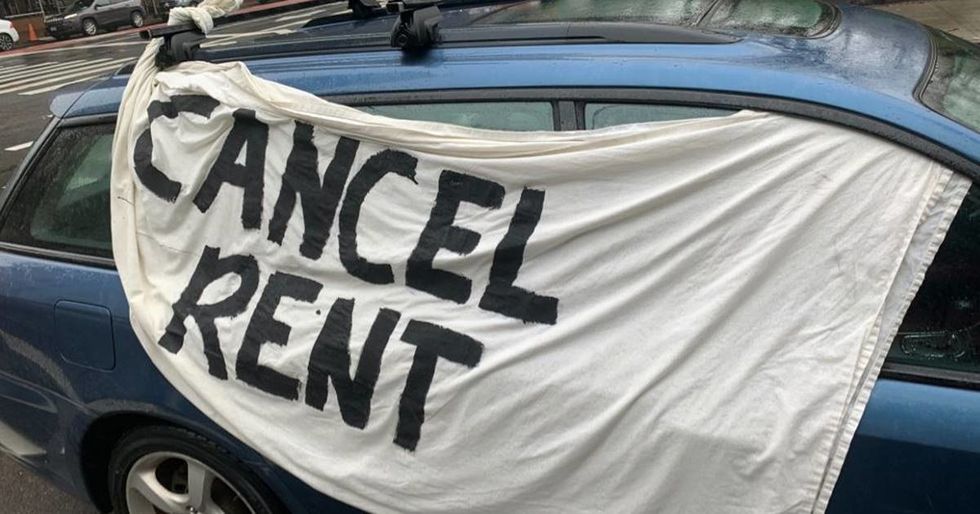 Tens of thousands of people across the United States are expected to take part in a rent strike Friday under the slogan "Can't Pay, Won't Pay" as the coronavirus-induced economic crisis and government inaction continue to leave millions without enough income to cover basic monthly expenses.

"The rent strike is a cry for dignity: We are all deserving of a home, no matter the color of our skin, financial status, or culture."
—Donnette Letford, New York Communities for Change

The strike, described as the largest coordinated tenant action in nearly a century, comes as state and federal lawmakers face growing pressure to cancel rent and mortgage payments for the duration of the Covid-19 crisis, which has thrown more than 30 million people out of work.

A Business Insider poll released Thursday found that nearly a quarter of Americans are unsure whether they will be able to afford their May 1 rent or mortgage payments.

"The rent strike is a cry for dignity: We are all deserving of a home, no matter the color of our skin, financial status, or culture," Donnette Letford, a member of New York Communities for Change, told The Intercept.

- Cancel rent for four months, or for the duration of the public health crisis—whichever is longer

"Unless our demands are met, many of us can't pay," the petition reads. "So if we can't pay, let's not pay, together! The crisis has caused a reduction in income for many of us, and the government response has been to shore up banks, large investors, and landlords."

Major rent strikes are also expected to take place in California, Pennsylvania, Missouri, and other states across the U.S.

"People are looking for something to join because they don't know what to do," Kenia Alcocer, an organizer with Los Angeles-based advocacy group Union de Vecinos, told NBC News.

"The reason why our campaign is called 'Food Not Rent' is because we're actually telling folks to choose your survival, choose your life, over paying your rent at this point," she added.

Rent Strikes are Growing Across the Country www.youtube.com

Last month, as Common Dreams reported, Omar introduced legislation that would cancel all rent and home mortgage payments for the duration of the Covid-19 crisis.

The Rent and Mortgage Cancellation Act, according to Omar's office, "would constitute a full payment forgiveness, with no accumulation of debt for renters or homeowners and no negative impact on their credit rating or rental history."

The bill would also "establish a relief fund for landlords and mortgage holders to cover losses from the cancelled payments and create an optional fund to fully finance the purchase of private rental properties by non-profits, public housing authorities, cooperatives, community land trusts, and states or local governments."

"In 2008, we bailed out Wall Street," Omar said in a statement. "It's time to bail out the American people who are suffering."

This article was originally published by Common Dreams and written by Jake Johnson.