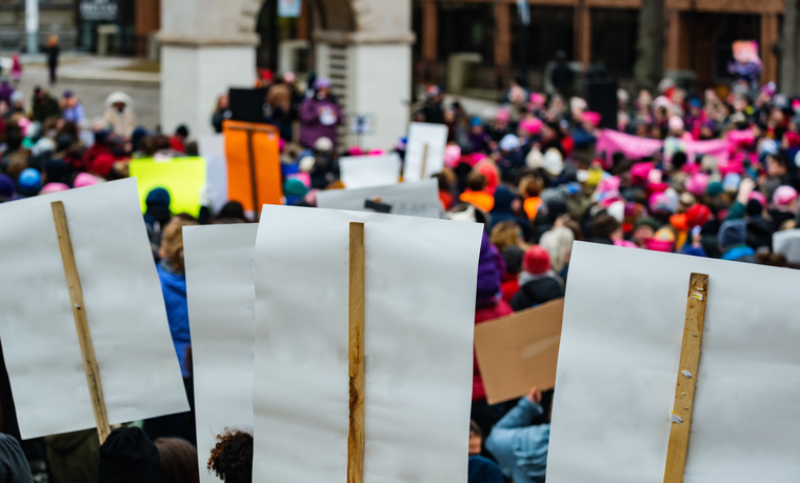 By Arzu Geybullayeva and OC Media

Last summer, LGBTQ+ activists were planning to hold a March of Dignity on July 5 in Georgia’s capital Tbilisi, organized as part of Pride Week 2021, but the march was canceled amid violent attacks by anti-LGBTQ+ protestors. At least 50 journalists were battered, and a violent mob stormed and ransacked the offices of the march’s organizers — Tbilisi Pride and the Shame Movement, a liberal activists group. Following the attacks, Tbilisi Pride condemned the violence and the local authorities’ inaction in a statement. Meanwhile, the Ministry of the Interior of Georgia vowed to investigate the attacks against the organizers. On April 4, nine months after the attacks, a court in Tbilisi ruled on the third and final trial. Outside the court, LGBTQ+ advocates and media workers waited for the verdict, as did hundreds of Alt Info supporters, a far-right and pro-Russian group who reacted with rage when the verdicts were announced. Heavy police presence kept the two groups separated.

Heavy police presence at the Tbilisi City Court where verditct will be announced for six charged for the attack at Lekso Lashkarava and Miranda. There are two counter rallies here: journalists and activists and those supporting the charged, mostly from Alt info group. pic.twitter.com/G961IcYEZ6

In total, 20 citizens were arrested and tried, receiving sentences ranging from six months to five years. One was fined and let go. None of the accused pleaded guilty, claiming they had not physically attacked anyone during the riots. Additionally, none of the organizers of the violent attacks, which were led by the extremist group Alt Info, have been charged.

Tbilisi Pride Week began on July 2, 2021, with the closed screening of a documentary film about the 2019 Pride march that was canceled after the local police refused to provide protection. The “March for Dignity” film screening was attended by diplomats and members of local civil society groups. Anti-pride protesters gathered outside the venue while police reportedly arrested some twenty people who attempted to disrupt the event. Last year’s March for Dignity was to be the culmination of a week-long series of events to celebrate Pride 2021.

The images of violence circulated by the journalists who attended the march spoke for themselves. The march organizers described the violence on July 5 as a “war declared against civil society and democratic values and the European course of the country.”

The demonstrators attacked journalists accusing them of “promoting the ideas of the LGBT community.” One journalist was reportedly dragged around by a priest. According to reporting by OC Media, the main organizer of the anti-Pride protests was the Georgian Orthodox Church, whose priests were visible during the demonstrations and at least on one occasion appeared to engage in an attack on a journalist.

According to reporting by local outlet Civil.ge, one priest, while addressing the crowd on July 5, 2021, encouraged violence “for the sake of homeland”:

You are obliged to use violence for the sake of homeland, the country, the sacred, a priest addressed far-right homophobic crowds earlier today.

Orthodox Church Patriarchate said it distances itself from statements calling for violence. #TbilisiPride#LGBTQpic.twitter.com/KqaQpbGIpL

According to Georgia’s Prime Minister, the organizers of the march were to blame for the violence. Speaking at a government meeting, Prime Minister Irakli Garibashvili said it was “unreasonable” for the organizers to march in a public space which could trigger “civil confrontation” at a time when the majority of the population finds LGBTQ+ identities “unacceptable.”

The Shame Movement, a Georgian activist group hosting the Tbilisi Pride organizers were forced to evacuate their office due to the violence, according to Amnesty International.

The attacks were widely condemned by international organizations and European leaders.

One of the journalists, Aleksandre Lashkarava, 37, was found dead in his apartment on July 11 in Tbilisi. Lashkarava, known among his TV Pirveli colleagues as Lekso, was among some 50 journalists who sustained injuries while covering the Tbilisi Pride March on July 5. Vato Tsereteli, the owner of TV Pirveli, blamed the government for Laskharava’s death.

The Ministry of the Interior was quick to dismiss any suspicions over the cause of death, suggesting that the journalist died from a drug overdose. According to the reporting by Radio Tavisupleba, the Georgian Service for Radio Free Europe at the time, the police rushed the journalist’s body for an autopsy despite the family’s demands to involve an independent expert. In January 2022, Georgian authorities finally released an autopsy report that claimed Lashkarava’s death was caused by a drug overdose, a conclusion that was questioned by Laskharava’s colleagues, government critics, and watchdog organizations.

During the third trial on April 4, six defendants were sentenced to five years in prison for assaulting TV Pirveli journalist Miranda Baghaturia and the late-camera operator Alexandre (Lekso) Lashkarava. Outside the courtroom, Baghaturia hailed the verdict, saying, “I held my breath for 10 months and now I can exhale.”

Queer rights activists attempting to protest homophobia and oppression in recent years have repeatedly been attacked by conservative counter-demonstrators. In 2019, Georgia’s first queer pride march could not go ahead as planned after the Interior Ministry announced that the police would not protect them.

This post was previously published on Globalvoices.org and is republished here under a Creative Commons license.